Scenarios are important strategic tools to anticipate future societal, economic, or technological developments and their potential impacts. Scenarios are applied in diverse settings and for different purposes - within firms, to support policy, but also across different actors to facilitate joint strategies. Scenarios can also explore the way a particular technology may be used in the future, and thus inform the research and design process. A large variety of types of scenarios have been developed and they differ for example in terms of starting point which can be either in the present (forecasting) or in the future (backcasting), in terms of time scale which distinguishes between long term (>25 years) and short term (3-10 years) scenarios but also in terms of content, complexity and the nature of the data (qualitative vs. quantitative) (van Notten, 2003). Scenarios do not aim at actually predicting the development of new technologies, but scenarios can help to get a better understanding of the scope of possible developments, which developments are important, how a technology may be used, which impacts it may have, and what may influence the fate of a technology. 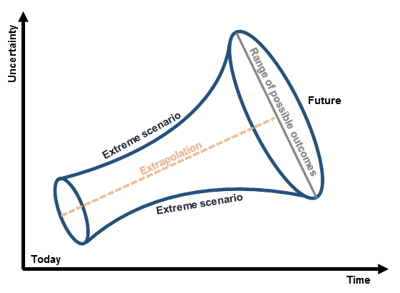 Mostly, scenarios start with the present situation or the developments which led to it, which is then extrapolated towards an envisaged future. Therefore, current events, research, industry and policy strategies, and public debates are taken into account. Obviously, the further we look into the future, the larger the range of possible outcomes and the larger the uncertainty. Still, signals of what is to come are visible in the present and can be translated into drivers, uncertainties and pre-determined elements of the future which are important building blocks of the scenarios. Scenarios often sketch various options of how possible futures could look like while the reality is likely to lie somewhere between these worlds.

Socio-technical scenarios sketch out technological and societal developments, for example how the action of industrial actors, regulatory agencies or the public acceptance can influence research and innovation processes and which alternative directions innovations, their application and broader societal implications may take (Parandian, 2012; Robinson 2009, Fraedrich et al., 2015). Techno-ethical or techno-moral scenarios focus particularly on normative issues and explore 'soft' impacts of technologies, such as the way norms and values, roles and responsibilities of actors, their relations and identities may change, or even our conception, e.g., our understanding, of a disease (Boenink et al., 2011; Krabbenborg, 2013). In both, socio-technical and techno-moral scenario theory, the co-evolution of society or morality and technology plays an important role: both can influence each other.

Socio-technical scenarios of nanotechnology in the food packaging sector

One example of a set of socio-technical scenarios has been described by Rip and te Kulve where they propose multiples futures for nanotechnology in the food packaging domain (Rip & te Kulve, 2008). The elaborate and complex scenarios are visualized in the figure below in a compact and simplified form. Socio-technical scenarios of organic and large area electronics are presented in an article by Parandian and Rip where they also describe the scenario building process in detail (Parandian, 2012). 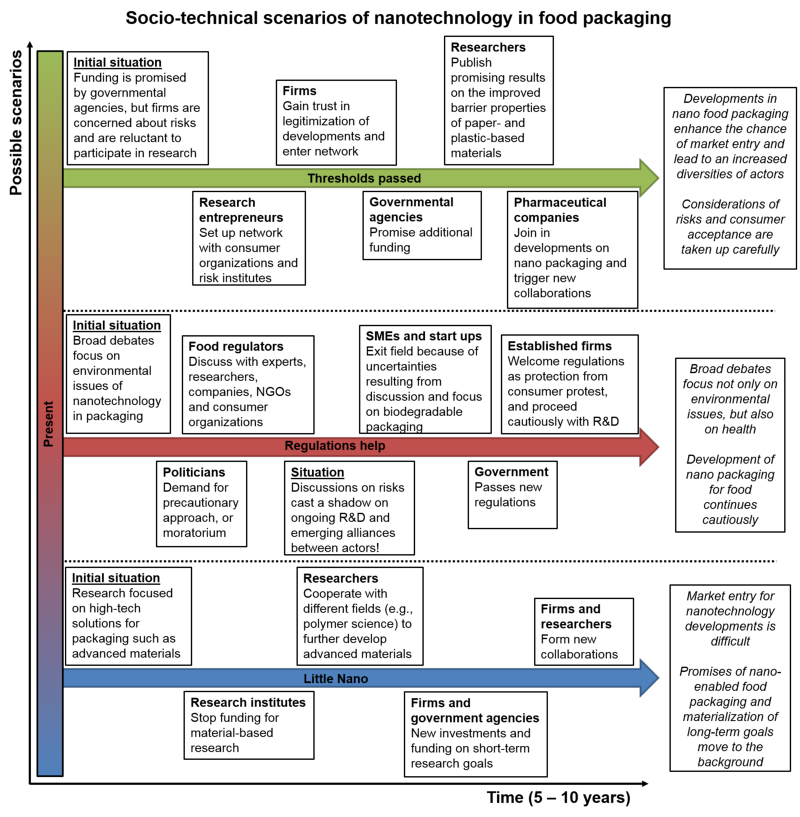 Reinventing the Dodo – a techno-moral scenario

One example of a techno-moral scenario or vignette has been written by Tsjalling Swierstra (Maastricht University) and Marianne Boenink (University of Twente) and animated by Steven van Eekelen (Animono). The scenario describes the resurrection of extinct species by synthetic biology. In this example, possible consequences of the resurrection of the Dodo are suggested, which are not directly obvious. This techno-moral vignette aims at stimulating discussion about synthetic biology.

The movie of the complete vignette can be found at: https://www.youtube.com/watch?v=lw-2886-Ft8. More techno-moral scenarios from the field of synthetic biology are available at: https://www.rathenau.nl/nl/page/synbio-scenarios.