Next to the socio-technical configuration that is required for a technology to work in practice, it can be interesting to understand which actors play an important role for a technology. Actors are people, industries, institutions or organizations who can affect or are affected by the technology. These actors are also often called stakeholders. An actor analysis provides an overview of various stakeholders that are involved in the development of a certain technology. Actors can be directly or indirectly affected by a technology. For car-based transportation, directly involved actors are the car driver, car manufacturer or oil companies. However, there are also actors that are affected by the car system such as pedestrians who directly experience the car traffic but are not driving themselves (Geels, 2005). The public transportation sector is affected indirectly as it needs to compete with car-based transport. Actors can also be affected indirectly by side-effects of car traffic such as accidents or air pollution. Such side-effects could turn into negative perceptions and therefore have an impact on the behavior and decision of actors. Public authorities for example could directly affect the technological development by introducing rules and regulations to increase car safety or to reduce environmental issues. Understanding these linkages between different actors, their roles and positions can help to anticipate and react on moves of actors and therefore positively support technological development.

The actor map provides you with an overview of various stakeholders connected to the technology and indicates who potentially influences technological development. Additionally, the actor analysis can help finding interesting collaborators, to select interview partners, or to identify actors with competing interests. 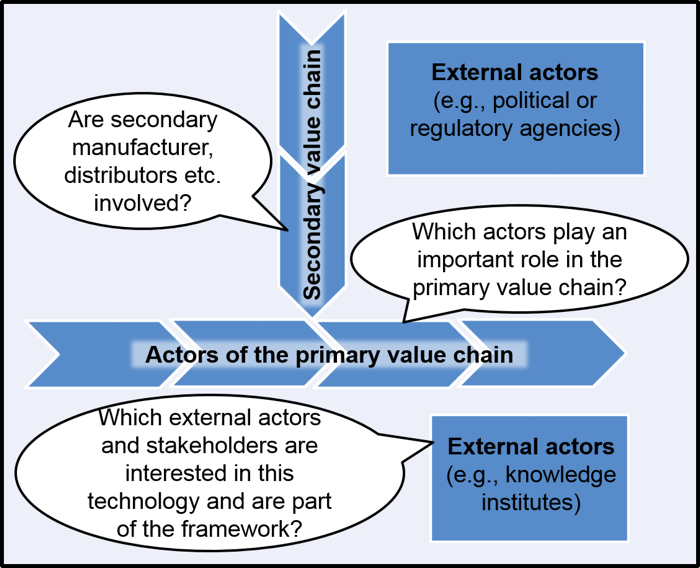 Actors for a drug delivery system

A linear actor map is created by te Kulve displaying actors in the field of drug delivery (Kulve, 2014). Here, not only a primary manufacturer producing the drug but also secondary manufacturers who are responsible for the packaging and the delivery systems should be taken into account. Dynamics in the world of pharma are important but also broader developments in the health care sector, such as reduction of costs for treatments and debates on reimbursements, should be considered. Additionally to firms, also knowledge institutes, clinicians, patients and governmental actors are involved. This actor map was created in advance of a workshop to better understand linkages between different stakeholders. 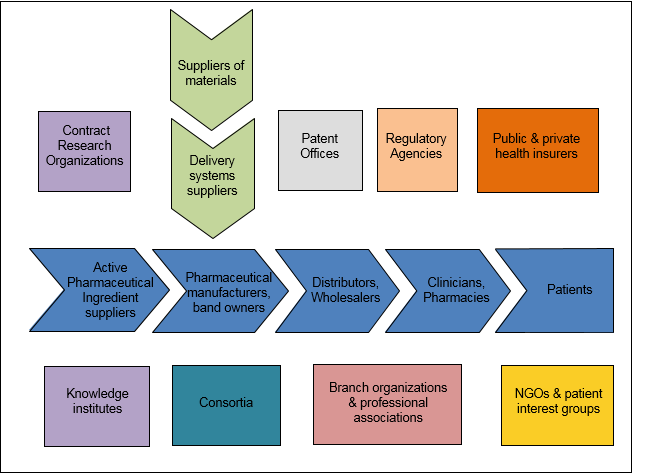 Actors directly or indirectly related to the car-based transportation system are shown below (see also Geels 2005a). Next to obvious actors such as technology developers and car manufacturers, indirectly involved stakeholders such as local residents or city planners play an important role: they are directly affected by the cars. Also the public transportation sector is indirectly affected by the high competition from the car-based transportation sector. The relationship between different actors can be disrupted by changes in the socio-technical system: regulations to increase safety could for example lead to the development of better brakes, less breakable glass or improved airbags which has an influence on the repair shops and manufacturers. On the other hand, to improve safety the road infrastructure, maintenance, traffic rules, or driver education could be adapted and improved which would affect completely different actors. Real estate agents for example are affected by secondary effects such as road building and traffic. 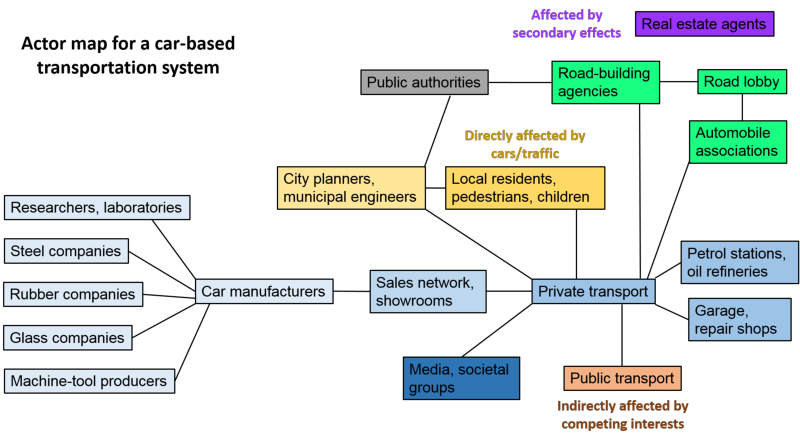